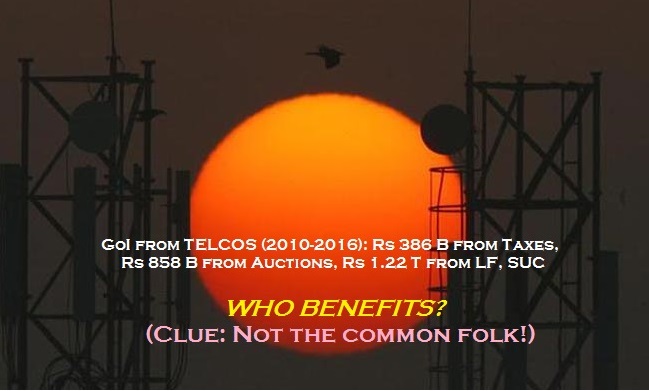 Public ownership of any good or service is fraught with inefficiency and lack of accountability. The Keynesian explanation in the case of, say a manufactured toy, is that a monopoly (i.e. in the classical sense,  government ownership) always produces less of a good or service at a higher cost. But Keynesians rebuke strongly any idea of non-public ownership of “public goods”, such as radio spectrum. Coming from a libertarian point of view, the Bullish Bear professes private ownership even for a public good or service, say military defense, and strongly refutes the need for government ownership. And how come the government came to own radiowaves – this valuable resource – in the first place? It wrote itself a title. Or probably did not bother to do even that!

Globally, low spectrum utilization has been observed and documented. A study in 2003 found that only 19% of frequency space in Washington, DC was used in peak times. Clearly, radiowaves are more abundant and hence less valuable than apparent at first. But we can hardly rely on the public sector to resolve this issue – the Indian Spectrum Management Committee (GOT-IT, 1999) had found that the armed forces had “squatted” on the radio frequencies they occupied while using very little of them (in the words of Ashok Desai, whose critical insights we rely on very much, and whose work we highlight later on).

The 2016 spectrum auction, which lasted for a workweek, enabled the government to sell 965 MHz of spectrum for a total sum of Rs 657.9 Bn or $9.85 Bn. This is equivalent to over 2.5 months of revenue of the largest private sector Company in India, Reliance Industries! Yet, this was an underwhelming yield for the government, because spectrum supply was plentiful, there was less need for renewals and also because the government shot itself in the foot with sky-high reserve prices for the most lucrative segments of spectrum, despite financially stresses of participants.

However, in this blogpost, the Bullish Bear will dwell more on the historic development of the telecom industry’s auctions and take a look at the harsh impact of the government’s severe interventions into what should have been the free market operation of this industry.

Competitive nature of the industry shaped by part-liberalization in the 1990s, giving relief from public sector stranglehold

The first glimpses of liberalization in the mid-1990s led to private sector participation being allowed in basic services, and growth in wireline services picked up. The Indian Telecommunication industry tried to embrace a more modern image with the National Telecom Policy of 1999, allowing private sector players to break through the monopoly of DoT little-by-little.

The short history of India’s Telecommunication Industry is, as laid out in this brilliant publication by Mr Ashok Desai, a tale of how entrepreneurs climbed their way out of the government’s impossibly high license fees by getting foreign partners and public sector banks themselves involved in funding telecom operations!

In the period before the liberalization began that we can get a glimpse of how state monopoly was playing a balancing act between hiding its laziness on the one hand, thus keeping at bay any deregulations and new entrants and yet, on the other hand, showing a substantial-enough pipeline of pending orders & risking revealing its laziness, thus staking a claim on additional funds from the government. We can post this revealing table below, in which we can see that despite substantial backlog of orders worth 25% of installed lines in 1982, growth in installed lines barely broke out into the teens in 1992! All this while, the waiting list was kept hovering at around 4 years!

Indeed, telephones were classified as a luxury item and given low priority in India’s socialistic five year plans. “The telephone system began to expand rapidly only in the late 1980s, when the ITI-Alcatel factory delivered switches in large enough volumes,” Mr Desai sighs.

How come the government owns the air above us?

Socialist India gave monopoly power to the Department of Post and Telegraphs, until 1985, when Mahanagar Telephone Nigam Limited (MTNL) and Videsh Sanchar Nigam Limited (VSNL) were created as public sector undertakings under the Department of Telecommunications (DoT). It is through this entity, the DoT, that the law still bestows an exclusive privilege on the Government to provide telecommunications services. The DoT issues various notifications imposing onerous obligations and restrictions on players in the industry.

“Is the radio spectrum a unique resource that belongs to the public, or can it be privately owned like any other good or service? Most people assume that public ownership is axiomatic—a starting point rather than the historical consequence of special interests pretending to misunderstand economics. This is wholly incorrect… Full-scale privatization of this resource is essential.” – B. K. Marcus, Mises Daily

It is worth our time to pause and evaluate this situation. At the moment, the government is holding back all the spectrum and renewing licenses to operate on it via the auction method. Some spectrum is in the low frequency ranges (Which have better ranging abilities), whereas some are in the high frequency ranges (Which can carry higher bit rates). But the government’s reclusive actions are creating artificial scarcity, particularly for the spectrum being used currently – as the government will obviously not auction spectrum that is Not in use currently in the telecom industry. Thus, not only is existing spectrum valued artificially highly, but there exists a systemic latency to discourage switching to higher spectra. Thus, players, particularly the incumbents, who have large amounts of capital and resources at their command, are less willing than they would otherwise be, to trial newer technologies at higher bit rates, thus retarding the speed of technological development.

Clearly, the government is meddling in the formation of lower prices at the consumer level both directly (through high taxes and license fees) and indirectly (through deceleration of technological innovation by encouraging extant spectrum usage).

Government’s Telecom booty: High spectrum fees accounts for all of the debt accumulated in recent years

An analysis of the government’s revenue from the telecom industry in the form of corporate taxes, licenses fees, spectrum usage charges and spectrum auction revenue suggests that the government is running its own parallel Company alongside: about the size of Idea Cellular, the #3 telecom company in India by market share. For every Rs 100 of honest revenue earned by the top-4 listed Companies, the government “earns” Rs 36, Rs 17.5 of which comes from License Fee (LF) and Spectrum Usage Charges (SUC), Rs 12.5 from spectrum auctions and Rs 5.5 from corporate taxes.

And it doesn’t stop there. The Bullish Bear estimates that the incremental indebtedness brought to bear upon the Companies brings the government an additional 0.5% through dividends from publicly owned banks (We have to assume a share of 50% to PSU banks, as break up of this data is not provided by the Companies nor by the banks). This equates to a cool Rs 4.4 Bn in FY16.

According to these estimates and adjusting for inflation, the Indian government has amassed nearly Rs 2,300 per man, woman & child in India since 2010, compared to the monthly income per capita for an average Indian of Rs 7,774. Were it not for spectrum auctions raking in Rs 85,000 crore since 2010 ($12.9 Bn at today’s exchange rate), the telecom industry, the top-4 listed players of which have accumulated total debt of Rs 1.26 Tn (57% of which have accumulated since 2010), would be almost certainly debt-free by now.

For investors, the golden period seems to have come to an end with the industry in a mature phase and the companies in serious financial stress.

Telecom companies, even including tower Companies, which are much more profitable (for now), have underperformed almost all prominent sectoral indices over the last three years. Despite exponential growth in data, overall growth seems to be slowing and it remains to be seen how the $20 Bn new entrant, Reliance Jio, impacts the structure of the industry. 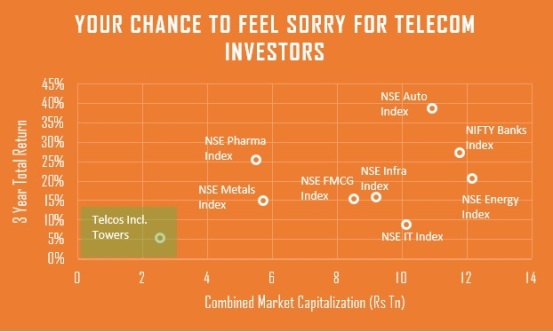 From the perspective of corporations, by logical and empirical evidence, we have seen how onerous public sector ownership and regulations have hampered the development of the telecom industry. India’s Telecommunication regulatory bodies: DoT, TRAI and COAI have become mightily powerful and can potentially become broad-based regulators and censors as well, if we were to look at the example of the United States: Marcus educates us as to how the regulator there, the FCC, has become “the largest censorship body in the world.”

But if we were to ask “Cui bono?” Not only has the government benefited, but the regulated industry itself being cartelized, its members have benefited as well. They pull together when in need to erect artificial barriers to entry (say a minimum paid-in capital or unbundling free internet messengers) and push together when defending from higher tariffs.

In summary, the government, the banks, the regulators and bureaucrats, foreign & domestic entrepreneurs are all in the gravy train, and the investors and public treasury have to protect their invested capital (in telecom companies and in the banks) & bear the risks (of investments failing). Investors blame the Companies, the Companies blame regulations and high interest rates, the regulators want revenue to shore up government revenue and the government cannot do without revenue, can it? All this while, the elephant in the living room, namely the unethical public ownership of radio spectrum, lives happily ever after!