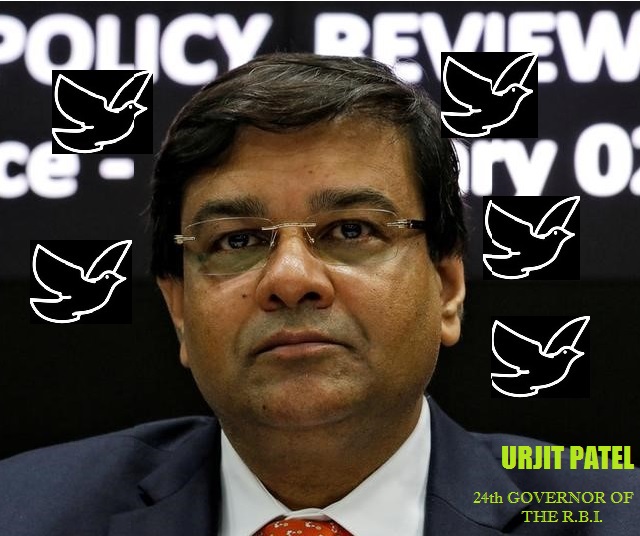 The Bullish Bear is back with a few delectable insights into yesterday’s rate cut by the Reserve Bank of India, a relatively unexpected one, albeit a sixth cut in just under 2 years. A basic survey of newspapers after yesterday’s events will reveal that many analysts seem convinced that Government has now sidelined its CPI target in coming years of 4%. Two quick deductions: (1) Interest rates are decidedly headed in one direction only: and that’s down. For now. And (2) Monetary Policy Committee (MPC) or not, Urjit Patel is there to command the ship as per the directions of the BJP-led government. I present my case here in support of such a growing belief that Urjit Patel is a dove trapped in hawk’s clothing under the previous governor’s regime.

#1 Recent data releases were mixed and technically, did not merit a reaction

A cut in interest rates seems to be the obvious course of action from the statistic of Bank Credit growth FYTD of 0.8% significantly lagging Bank Deposits growth of 5.0%. However, sound economics will deduce, infact, a necessity to raise interest rates based on this data point! More money growth in the system is a warning sign of excess money creation, and a cut in interest rates will only add fuel to the fire. In any case, even if we were to analyze the conventional view of cutting interest rates, rate hike transmission was the key intermediate step to resolve: Over the last 150 bp of rate cuts, only 70bp have been passed on. 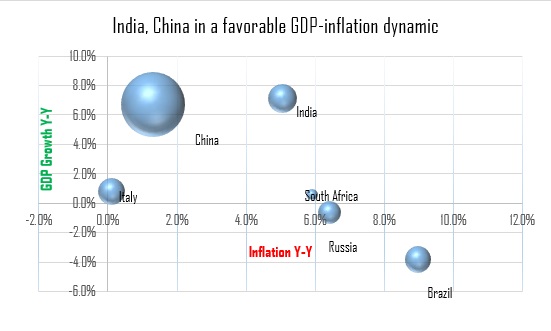 Comparing India’s positioning to BRICS nations, for the large part, India has favorable growth statistic (9th highest in the world), but is at risk from rising prices. Upside risks to CPI include (1) rising crude prices, (2) upcoming strong quarter for Gold, which may strain deficits & the Rupee and (3) government largess in wages and compensation fueling consumption demand. And although RBI’s release cited moderating food prices as a relief, it should be noted that the food price inflation index is first of all, volatile, and second of all, at a level of 8.23% in July, still very high!

Since Urjit Patel’s appointment as governor on August 20th, analyst polls on rate cut swung significantly to a more dovish stance (From under 12% expecting a rate cut in deposed governor Raghuram Rajan’s last meeting on August 9th to over 40% ahead of October 4th meeting chaired for the first time by Mr Patel). Reuters on 30th September stated that “Several analysts in the poll said they expect him and the newly-formed Reserve Bank of India Monetary Policy Committee to follow a more dovish path than his predecessor.” If analysts are to be considered “informed,” then this large movement in the informed consensus on what’s coming held valuable information for the market.

Numerous instances have been reported documenting politicians criticizing Raghuram Rajan’s monetary policies. Dovish Government stalwarts such as Rajya Sabha MP Subramianian Swamy openly backed the instalment of Urjit Patel, who thought it was “idiotic” to believe that Patel will be as hawkish as deposed RBI Governor Raghuram Rajan. Mr Patel may have some wrongful history as well: it was reported that Patel was involved at the highest levels with scamster Jignesh Shah, according to a report by India Samvad.

And lest we forget the basics of how the central bank operates in India. Per the Reserve Bank of India Act, 1934 (Updated January, 2013): (1) Its governors are appointed or nominated by the central government, (2) the Government of India also dictates the appointment/ nomination of all directors to RBI’s board of directors, (3) the RBI was nationalized on 1 January, 1949, and is fully owned by the Government of India.

And best of all: the RBI does not even get audited!

Oddly enough, the National Retail Federation (NRF) did not choose to build on its 2014 ruse that Thanksgiving sales, which were down 11%, were disappointing because there is an “evolutionary change” of online shopping. If anything, this theme would have found stronger support in the media this year, with Amazon sales growing by 23% in Q3 and a MasterCard research citing holiday season online sales growth of 20%. Never mind the fact that online sales only account for a tiny portion of total retail sales.

However, better sense prevailed. The NRF did admit, to a large degree, that the U.S. Retail sector has been weak. And don’t be fooled: despite U.S. holiday sales (sales in November and December excluding autos, gas and restaurants) growing by 4.1% in 2014 and an estimated 3.7% in 2015, the consumer is under pressure.

The NRF, in fact, went on to highlight in this article that although general retail prices were 2.9% lower in October than a year earlier, as per the U.S. BEA, rent, healthcare costs and even the amount spent on communications like smartphones, tablets and broadband Internet service had all increased. Much of the extra money freed up by lower gasoline prices would have plausibly gone to such higher costs and travel and restaurants rather than retail merchandise. In other words, the consumer is feeling the pain pretty much everywhere, leaving little room for discretionary expenditures to grow.

“All of this has combined to create a very deflationary atmosphere the past year or more, meaning retailers have needed to be competitive and drop prices to keep products moving off the shelves.”

Retail Sales in the U.S. increased 1.40% in November of 2015 over the same month in the previous year. The figures have been on a downward trajectory of late and missing forecasts significantly and consistently (Source: tradingeconomics.com).

From the NRF’s perspective, Retail sales for November — excluding automobiles, gasoline and restaurants — were up 3% from a year ago, also below its expectations. 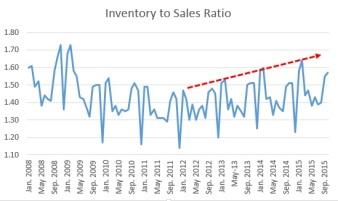 Readers may be astonished to know the strength of this weakness – the October U.S. Census Retail Inventory to Sales ratio was at the highest point since 2008 at 1.57. This means that the retail industry, on an aggregate, was overstocked by an astounding 57% in the month of December.  Even more distressing is that the ratio is well spread throughout sectors – Clothing & Departmental Stores have inventory worth close to 3x the revenue they are generating. Motor vehicles, home appliances, building materials and general merchandise have on an average 1.86x the inventory than sales. Also, looking at historical trends, this ratio usually drops sharply m-o-m in December, but then picks back up again in January to beyond levels seen in October.

The pain, thus, is likely to intensify for corporations in a soft growth environment, in the March-2016 quarter.

U.S. corporate profits decreased by 1.7% to USD 1508.90 Billion in the third quarter of 2015 from USD 1533.90 Billion in the second quarter of 2015. Moreover, comparing retails sales y-o-y growth of 1.7% to CPI rise of 0.20% y-o-y and wage growth rate of 4.3% y-o-y in October 2015, corporations are clearly troubled. (Salaries as a percentage of operating expense varies from 18% in retail/wholesale trade to 52% in health care services. Source: Society for Human Resource Management). If one were to consider Shadow Government Statistics’ 1990-based CPI figure of close to 4%, coupled with the wage growth of also in the region of 4%, one can see that the retail sales did not rise enough to offset the increase in costs for the corporations.

Yet, our Christmas isn’t complete without that little twist in the headline by the NRF: “Consumers Win as Retailers Cut Holiday Prices”! It’s alright, because despite bad news for retailers (the very group that NRF represents) who are having to slash prices, it is good news for the customers “in the long term”. Gotcha!